In a bid to continually stay at the forefront of who’s happening in the world of design, two of our Design team, Amy and Amanda, headed to Melbourne last week for Indesign.  Traditionally an event about the exchange of ideas, Amy and Amanda joined major players in the design industry to talk shop.  Though new releases were an important feature of the event, there was an overwhelming emphasis on key ideas and hard-hitting issues such as the future of the workplace. 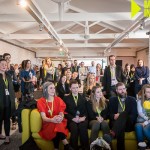 At Priority, we believe that people are our most valuable resource and their safety is of the highest importance.